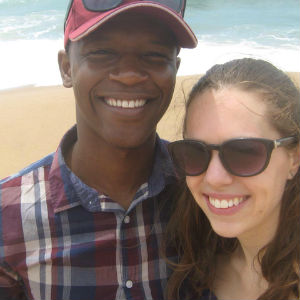 Sthembiso was brought to Project Gateway at the age of six. His mother, grandparents and aunts had all died, his father's whereabouts was unknown, and there was no one left to care for him.

Sthembiso was placed in the care of  Helen Sutherland, who registered him at  Gateway Christian School.  Initially, it was a battle for all concerned, but the staff persevered, and as he moved up year by year, he began to progress  - so much so, that he leaped two years  and finished his primary school education as a Prefect!

Living under the care of Project Gateway,  Sthembiso then transferred to High School.  At the end of 2009 Sthembiso’s academic marks for the year and in examinations placed him 1st out of more than 200 Grade 10 learners. At the same time he excelled in several sports and was awarded Sports Colours for Soccer. He was again top, in Grade 11.

Sthembiso ended up graduating from High School as 'Dux' of the school! (for all you budding etymologists, ‘Dux’ is Latin for ‘Leader’, and means that Sthembiso graduated as the top academic student in the school!)  He was then awarded a bursary and a place at Wits - a prestigious university in Johannesburg, where he was to study Electrical Engineering. Due to financial issues and struggling with the Maths, Sthembiso decided to take a year out, but returned to Varsity later.  During this time, Sthembiso was given an opportunity to spend a year as an IVEP (International Volunteer Exchange Programme) participant with the Mennonite Central Committee. Whilst in Canada working as an IT assistant with MCC Canada, Sthembiso met Nikki. They will be married in December 2018, and Sthem will complete his degree in Electrical Engineering.  Who knows what the future holds!