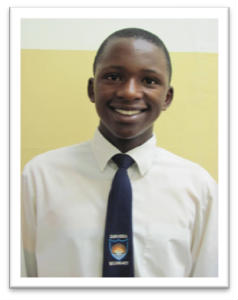 Siyabonga came to the attention of Project Gateway when we learned that his father had died from TB, in February 2009.  Siyabonga’s mother then had a stroke and was suffering from a mental disorder, and died in October 2010.  This left Siyabonga and his younger brother Sibonelo alone and with no income.  Although some relatives came forward to take the boys and claim foster grants for them, Siyabonga knew that his father’s house – if left unoccupied – would be vandalised or sold by people who had no right to it.  The younger brother went with the relatives but Siyabonga believed he could make a better life for himself if he remained in his father’s house.

Although Project Gateway was able to support Siyabonga with food parcels, clothing and school uniform, and other essentials, it is Siyabonga’s own efforts which have made him an awesome young man. Supported by a couple attending the same church, Siyabonga completed school and then enrolled at a local agricultural college.  He has now completed his studies and is working in Project Gateway's gardens.  In the summer he told us that he would like to go overseas to study further.  He is a polite, gentle and ambitious young man who has not let adversity hold him down!