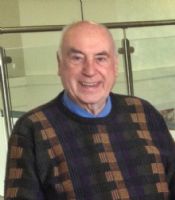 Many of you will know, or know of Reg Witchard, Founder and Chair of the PCF Gateway Trust.  During 2006 Reg was asked to assist Project Gateway with the setting up of a UK based Charity Trust.  Reg returned to the UK and set to work. He recruited a number of volunteers as Trustees, and with himself as the Chair, established what has become a very successful fundraising entity.  Reg will be succeeded by Sally Wood, a long term volunteer at Project Gateway, and now based back in the UK.

The Executive Board and the CEO of Project Gateway, Pastor Jabulani Mnculwane, are most grateful for the contribution that Reg has made in assisting Project Gateway:

Not only has Reg Chaired the Trust for the past 11 years and spent many hours fundraising, he also spent much time speaking at various churches and groups who support us and with anyone who was interested in finding out what Project Gateway does on a day to day basis. Reg travelled with his wife Joan to South Africa at his own expense on many many occasions. Together they continue to host a representative from Project Gateway on an annual basis, providing accommodation and meals.

For this, we at Project Gateway will always be incredibly grateful and pray that the blessing they have given us will be returned to them 100 fold.

As he approaches his 80th birthday, Reg has decided to step down from Chairing the UK trust, although he will remain a Trustee.

On behalf of the Executive Board of Project Gateway we would like to thank Reg and Joan Witchard for the amazing contribution that they have given to Project Gateway.

If you would like to make a donation to the work of Project Gateway, please click here: